Miguel de Cervantes Saavedra (1547-1616) is one of the most influential authors of all time. His El ingenioso hidalgo Don Quijote de la Mancha [The Ingenious Gentleman Don Quixote of La Mancha] (1605, 1615) has been translated into over 50 languages and has been the subject of thousands of critical studies, the impetus for numerous filmic adaptations, and the basis for the Tony-award winning musical Man of La Mancha. Beyond his novel about a country gentleman driven to seek adventures as a knight errant after voraciously reading chivalric tales, Cervantes wrote poetry, plays, and novellas. Throughout his work he explores themes as varied as gender, history, politics, war, writing, crime, the law, religious and cultural difference, and representation.

To commemorate the 400th anniversary of his death, this exhibit invites a consideration of how Cervantes—through Don Quixote—has stirred visual artists to represent his most famous characters and their “adventures” over the centuries. Each case features images spanning from the 18th to the 20th century from the University’s Rare Books and Special Collections. The students of the “Don Quixote: The Book, The Myth, the Image” course selected and analyzed a main image, which is complemented by another related illustration and displayed alongside a depiction of Cervantes. The chosen images—and the themes they conjure—frame the novel in ways that challenge the reading of Cervantes’ masterpiece as a book solely about a “madman” who dares to dream an impossible dream. They also invite one to read the novel, exploring beyond the iconic windmills to better understand the narrative nuances as well as the historical context of early modern Spain. It becomes clear that the highly visual style Cervantes employs has inspired and challenged the imaginations of writers, readers, and artists alike.

The history and adventures of the renowned Don Quixote / translated from the Spanish of Miguel de Cervantes Saavedra ; to which is prefixed, some account of the author's life, by T. Smollett. 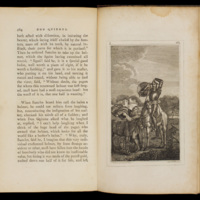