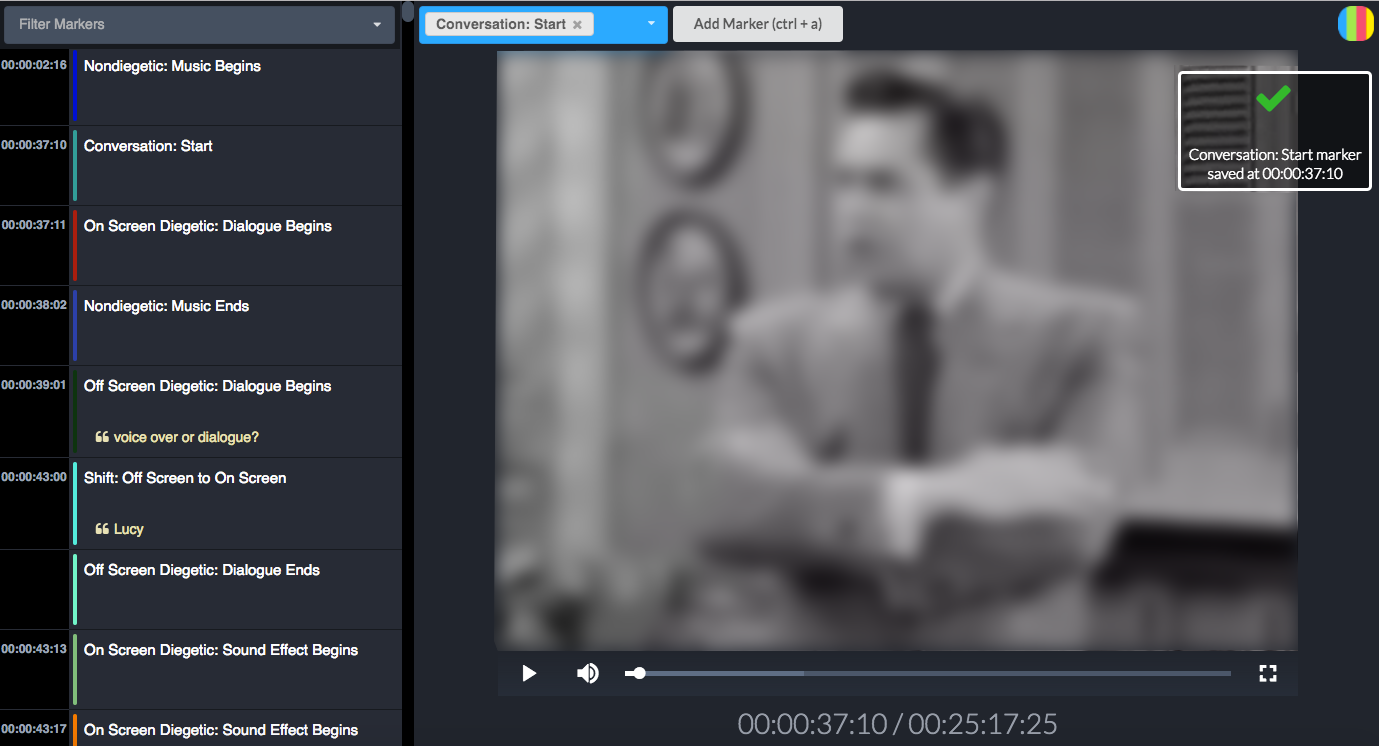 Mediate is a collaborative time-based media annotation tool developed by River Campus Libraries and Joel Burges, Associate Professor, Department of English, Film and Media Studies, Digital Media Studies, and Director of the Graduate Program in Visual and Cultural Studies at University of Rochester.

Media literacy is one of the most pressing concerns for research and teaching due to the centrality of multi-modal content—images, sounds, and text—in our culture. From film and television to video games, music videos, social media, music, and podcasts, multimodal content is ubiquitous in our everyday lives. Yet education still focuses primarily on text-based literacies. Mediate, a web-based platform that allows users to annotate multimedia content, tackles this problem by providing a means for individual or collective inquiry into time-based media. Users can to upload video or audio, generate automated markers, annotate their content on the basis of customizable schema, produce real-time notes, and export their data to generate visualizations.

Once the annotation process is finished, users have a wealth of preserved data and observations about the media. Past students have used that data to create visualizations based on their observations, using the visualizations to test hypotheses and produce interpretations of multimodal content. The utility of Mediate ranges from students learning to close-read time-based media narratively, visually, and sonically to scholars working individually or collectively to reevaluate central questions in the history of moving images or sound recording at both microscopic and macroscopic scales.

Since 2012, Mediate has been used in eighteen courses, reaching over 400 students. While use cases continue to grow, Mediate has been used primarily for courses in Film & Media Studies, Linguistics, and Music. We continue to seek other use cases, including looking at the potential for using Mediate to crowdsource identification and information on local historical film archives. Below are two sample annotation interfaces for linguistics and music.

Mediate is a web-enabled software platform built in Python and JavaScript. It makes use of several popular and well-maintained open source libraries, including Django for its server-side application, OpenCV for computer vision and image processing, FFMPEG for multimedia transcoding, and ReactJS for its client-side application. Mediate is designed to handle large sets of annotations (which we also call “markers”), and supports concurrent updates through websockets, enabling a truly collaborative real-time system composed of several modules all tied together by a RESTful API. Through the API, users are able to create custom tags, upload media, create groups, add annotations, and query data in CSV or JSON formats. All uploaded video files and resulting derivatives are currently stored in a secure, aliased directory, and are only available to those users who have sufficient permissions to view them. In addition to the images and video files produced through the video processing pipeline, all annotations and relevant metadata are stored in a secure PostgreSQL database and backed up regularly. Since Mediate is not designed as a digital asset management or preservation system, original uploads are removed from the server once the derivatives have been successfully created.

Mediate has entered the second phase of development. Based on student feedback, Josh Romphf has made substantial changes to the user interface. In spring 2019, we ran student focus groups on Mediate in order to gain further insight to help prioritize future features. In fall of 2019, undergraduate researcher assistant Tiamat Fox worked with the project team to develop more robust documentation and synthesize feedback from the expanded use cases. Much of 2020 was spent developing a more user-friendly administrative interface, which is now ready to be tested. Moving forward, we are looking at developing more robust data querying along with roles and permissions, the capacity for location-based marking, durative markers, IIIF presentation API 3.0 support, and in-platform data visualizations.

Sign-up to receive updates about Mediate. In the coming year, we will reach out to colleagues at other institutions to test the new administrative interface and possibly see if there is interest from the community in using Mediate in a research project or course.

The project team owes a debt to those who worked on the early stages of development, including: