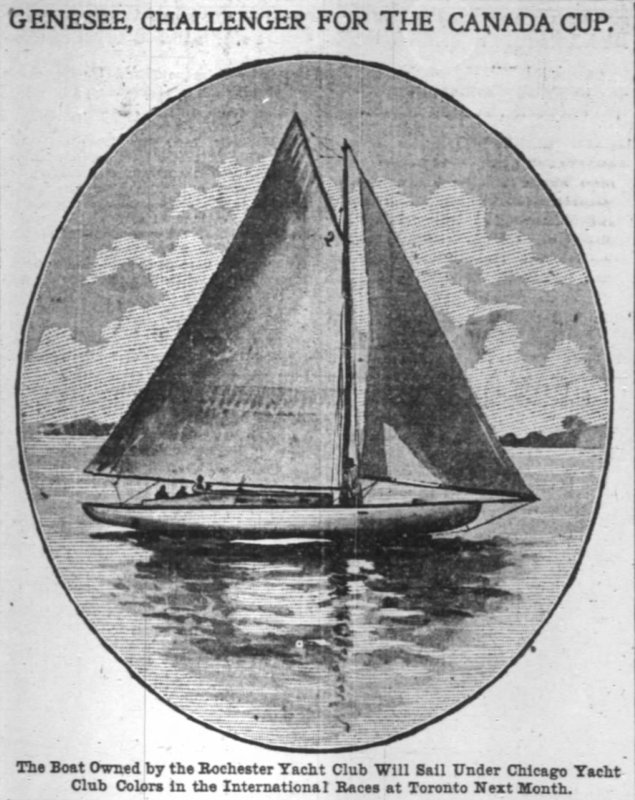 Racing fever struck Rochester in 1897.  The Canada Cup competition between U.S. and Canadian racing yachts had begun just two years earlier, when Chicago’s Lincoln Park Yacht Club challenged Toronto’s Royal Canadian Yacht Club.  The Canadians won, and American Great Lakes yachting clubs began to consider a return challenge.  The Rochester Yacht Club incorporated the Rochester Yacht Club Company to design and build its candidate, the racing yacht Genesee.  James Sibley Watson Sr. and Hiram Watson Sibley were prominent backers and directors of the company. J.G. Averell was involved in the initial planning, and at one point was considered for a position on the crew, however he was more interested in racing the Veritas and playing golf. In preparation for the 2nd Canada Cup, American clubs competed in Chicago in July 1899 for the privilege of challenging the Canadians.  The Genesee won the trials and competed against the Canadians as the representative of the Lincoln Park Yacht Club.

The Canada Cup races took place in Toronto from August 21-25, 1899.  In 3 races, the Genesee beat the Royal Canadian Club’s Beaver, winning the Cup for the United States. After the race, the Genesee was auctioned to Charles Van Voorhis, one of the directors of the syndicate that built the yacht.