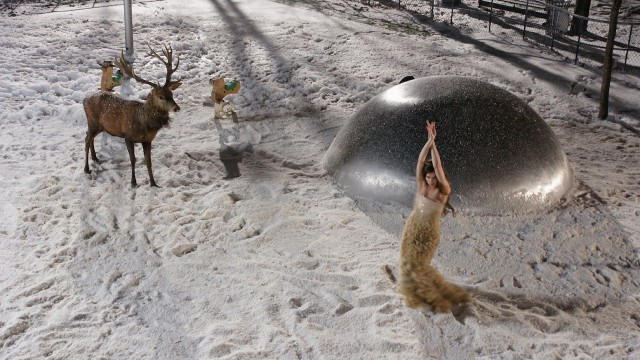 All the films that will be screened during our upcoming event speak to or mark a departure. What does it mean (for a film) to depart? What does ‘leaving’ look like? Departing speaks to movement across space and time. To what extent can the act of leaving something, some place, an epoch? Must an arrival follow every departure?

A departure is: an event; a displacement; a journey; something to celebrate, something to mourn; the foreclosure but also the inauguration of something.

Perfumed Nightmare (Kidlat Tahimik, 1977, 16mm)
Tahimik is a young man living in a small Filipino village. As the film opens, we see him in three stages of life (symbolized by toy and then real “jeepneys,” the elaborately re-crafted and decorated vehicles that have their origins in the Jeeps left by the Allies in World War II) crossing the bridge–“the bridge of life”–to his village. Narrating in voice-over, Tahimik explains the patterns of daily life in the village. He has a fascination with the Voice of America broadcasts, and particularly with the space program. When an American arrives for an aborted international conference, he gets his chance. The American asks him to come to Paris, to run his chewing-gum-ball machine concession on the streets. In Paris, and on a trip to Germany, he makes friends and discovers that progress in the developed world sacrifices important values. Backgrounded by footage of a summit meeting in Paris, and unable to return to an idealized image of his past, he stubbornly refuses to capitulate to the terms of progress, resigning from his post as head of the Werner von Braun fan club and maintaining that he will find his own way.

The Intruder (Claire Denis, 2004, 35mm)
Louis Trebor, a man nearing 70, lives alone with dogs in the forest near the French-Swiss border. He has heart problems, seeks a transplant, and then goes in search of a son sired years before in Tahiti. Told elliptically, with few words, we see Louis as possibly heartless, ignoring a son who lives nearby who is himself an attentive father to two young children, one named for Louis. He leaves his bed one night – and his lover – to kill an intruder; he dreams, usually of violence. Will his body accept his heart? Will his son accept his offer?

Visage  (Tsai Ming-Liang, 2009, 35mm)
Hsiao-Kang, a Taiwanese film director, travels to the Louvre in Paris, France, to shoot a film that explores the Salomé myth. Tsai’s films are unbound. Tsai’s regular Hsiao-Kang and Jean-Pierre Léaud (400 Blows) costar in a film that freely refers to Tsai’s previous films, Christian/Taoist icons, and images derived from popular culture. Mirror images of a sleeping man, a slow flooding of a Parisian apartment, images in Visage spill out beyond the framework of the film.