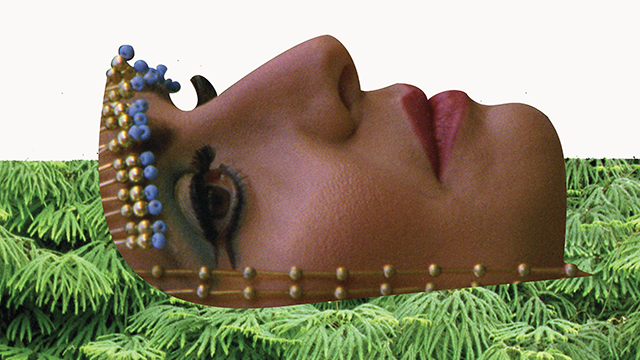 (Above image: detail of poster designed by Adam Maida)

LET US PERSEVERE IN WHAT WE HAVE RESOLVED BEFORE WE FORGET
(2013, 20 min., Super-16mm on video)
“We are happy. (Silence.) What do we do now, now that we are happy?”
– Samuel Beckett, “Waiting for Godot”
“John Frum prophesied the occurrence of a cataclysm in which Tanna would become flat, the volcanic mountains would fall and fill the river-beds to form fertile plains, and Tanna would be joined to the neighbouring islands of Eromanga and Aneityum to form a new island. Then John Frum would reveal himself, bringing in a reign of bliss, the natives would get back their youth and there would be no sickness; there would be no need to care for gardens, trees or pigs. The Whites would go; John Frum would set up schools to replace mission schools, and would pay chiefs and teachers.”
– Peter Worsley, “The Trumpet Shall Sound: a study of cargo cults in Melanesia”

ATLANTIS
(2014, 24 min., Super-16mm on video)
“We Utopians are happy / This will last forever”
Loosely framed by Plato’s invocation of the lost continent of Atlantis in 360 BC and its re-re-resurrection via a 1970s science fiction pulp novel, Ben Russell presents a documentary portrait of Utopia – that relative paradise, an island called Nowhere which has never / forever existed beneath our feet. Herein is folk song and pagan rite, reflected temple and Templar Knight, the lonely body of Man disappearing into the glimmering sea. Even with our mouths full of sea-water, we persist – happy and content.

GREETINGS TO THE ANCESTORS
(2014, 29 min., Super-16mm on HD)
Set between Swaziland and South Africa, in a region still struggling with the divisions produced by an apartheid government, GREETINGS TO THE ANCESTORS documents the dream lives of the territory’s inhabitants as the borders of consciousness dissolve and expand. Equal parts documentary, ethnography and dream cinema, GREETINGS TO THE ANCESTORS presents a world whose borders are constantly dematerializing.
Commissioned by Northern Film & Media and Berwick Film & Media Arts Festival with support from Arts Council England and the European Regional Development Fund; additional support from the MacDowell Colony