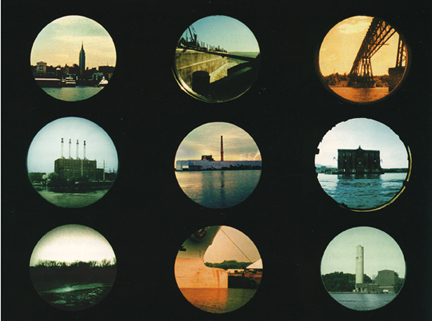 Free and open to the public. All films screened in 16mm. Refreshments to follow.

Time and Tide (Peter Hutton, 2000)
I’ve never felt that my films are very important in terms of the History of Cinema. They offer a little detour from such grand concepts. They appeal primarily to people who enjoy looking at nature, or who enjoy having a moment to study something that’s not fraught with information. The experience of my films is a little like daydreaming. -Peter Hutton

Go! Go! Go! (Marie Menken, 1964)
The realist sees only the front of a building, the outlines, a street, a tree. Marie Menken sees in them the motion of time and eye. She sees the motions of heart in a tree. … A rain that she sees, a tender rain, becomes the memory of all rains she ever saw; a garden that she sees becomes a memory of all gardens, all color, all perfume, all mid-summer and sun. -Jonas Mekas
     
Vacancy (Matthias Müller, 1998)
His works can be read as an unwritten history of experimental cinema in Germany. He has been known in the film world for decades due to his presence in numerous short and experimental film festivals in Germany and worldwide and in communal cinemas. Furthermore, in recent years, he has made a name for himself in the art world as well with his video installations and photography. From the Super 8 movement in the eighties as well as the genre-crossing work with found footage, through the mutual interweaving of analogue and digital image media up to the cinematographic installation: In Müller’s biography as an artist and in his film aesthetics, Hollywood, avant-garde film and queer cinema meet, as well as the radical changes in media and representation technologies in the eighties and nineties – together with the resulting changes in the cinematic landscape, which for him too have opened up to include the art spaces. -Arsenal Experimental, Berlin

Barn Rushes (Larry Gottheim, 1971)
It was the barn itself, the slats, the barn as a light-imagemaker that set me going. Each technical problem (what filming speed, what lens?) called forth a solution that led me into the form of the film. It was the camera itself howling for a rewind of its spring after each sizzling rush of image grabbing (producing, in negative, that serene bobbing movement) that pushed me out of single- shot films (but not into montage editing). Once having decided to give each spring-run its distinct territory on the camera roll, I found I had, in microcosm, a structure for the whole film, each roll linking on to the next in a straightforward linear form. The eight selections are not quite arranged in chronological order but are put together (selected from a larger collection of material) so that each makes a particular contribution to the overall experience. Certain possibilities are amply presented in the first four sections; the fifth and sixth are crucial to be worked through for the final sections to offer something ecstatically new. -Larry Gottheim

L’Arrivée (Peter Tscherkassky, 1997/1998)
First you see the arrival of the film itself, which shows the arrival of a train at a station. But that train collides with a second train, causing a violent crash, which leads us to an unexpected third arrival, the arrival of a beautiful woman–the happy-end.  Reduced to two minutes L’Arrivée gives a brief, but exact summary of what cinematography (after its arrival with Lumières train) has made into an enduring presence of our visual environment: violence, emotions. Or, as an anonymous american housewife (cited by T. W. Adorno) used to describe Hollywood’s version of life: “Getting into trouble and out of it again.” -Peter Tscherkassky

Images of the World and the Inscription of War (Harun Farocki, 1989)
“Between the images and the commentary there is a parallel, but it’s a parallel that will meet in infinity” -Harun Farocki. At the center of Images of the World and the Inscription of War are aerial photographs of Auschwitz taken by American planes in 1944 and the photographs of new arrivals to the camp taken by the SS. How do we deal with these images? What kind of knowledge do we produce through our encounters with them? Farocki’s essay film offers a rich historical study of photographic surveillance and knowledge-production that constantly returns to our relationship with the images and texts.

Sanctus (Barbara Hammer, 1990)
She has transformed ‘found footage’–scientific x-ray films from the 1950s–into a lyrical journey, transforming this raw material into a celebration of the body as temple. -Jon Gartenberg, Asst. Curator of Film, Museum of Modern Art, NY

Fifty Years: An Album (Abbie Herrick, 1975)
Have you ever wanted to look through old albums and diaries to see how people were years ago? Old films, snapshots, and animation with diaries as commentary, show three generations of a family (1915-1965) and the world around them from Wold Wars to World’s Fairs, Vietnam and the assassination of JFK. –Abbie Herrick